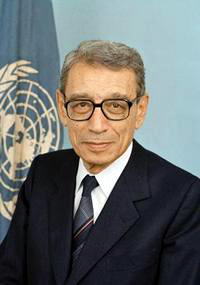 By Boutros Boutros-Ghali
Former Secretary-General of the United Nations

I have been in public service more than 60 years now. I have been a university professor, a civil servant in my own country Egypt, an international civil servant in the United Nations and in the organization of Francophonie, and have been engaged in a number of civil society organizations and associations. I am currently the Chairman of the Board of the South Center, an intergovernmental organization of the developing countries, as well as the President of the Human Rights Commission in Egypt.

I am as busy as ever, in an effort to continue making a contribution to the solution and management of the many challenges that confront the world peoples, and the international community as a whole. I do not plan to stop, as long as mental and physical health continues to serve me.

Over the six decades of my professional career, the world has become more complex, more dangerous, more interrelated and more interdependent. I have watched this by being involved directly in a large number of problems and crises at the national and regional levels, and at the global level. This world requires enlightened leadership, nationally and internationally. It also requires informed and sophisticated citizens and public opinion.

Thus, one of message that I think should be conveyed to the young worldwide and in all countries, who will be the future leaders and citizens, is the need for their awareness and understanding of the nature of the problematique on the international agenda at the start of 21st century, and thus their ability to respond to these challenges in a positive and constructive manner, and to be able to participate effectively in the related processes.

This awareness and understanding, which is a prerequisite for such effective participation, is a keynote for building and making possible a democratic international community, and overcoming the present situation where only a few take decisions which affect all, everywhere, without their having any say.

Thus, the role of the young, coming generations in all countries is to evolve a positive outlook on global affairs, and to reflect this in their personal lives and works. They should develop skills and abilities, and organize in order to gain a role in decisions that affect their future and their destinies. It is they who will need to shape globalization, seen as a process of bringing and weaving together the world peoples and nations into a genuine international community, rather than a process which in its present form intensifies conflicts, threatens peace, deepens development gaps, magnifies poverty and undermines the environment on which our very survival rests.

The second message concerns the vital importance of public service and of public causes. In recent times, many of the young have been brought up to think only about themselves, their personal interests, and indeed, the monetary gain that a given career or profession commands. Esteem for the public service has fallen notably, and it can no longer compete for the best and brightest that are attracted by the private sector and other more promising occupations. And, the public causes and interest are of concern to a relative few among the young, who find their channels of expression in the civil society.

This century will require renewed commitment to and central place in the human affairs of public service, in particular in the service of public causes that transcend national boundaries and specific interests. The challenge to the young everywhere is to be prepared to assume the myriad tasks that will arise, and to have an appropriate global vision and understanding necessary to inspire and guide them in their careers and lives. They will also need to provide the pool of talent and brains for international civil service in the UN system, which should evolve into a backbone of a progressive, democratic and equitable world order and international community in the decades to come.