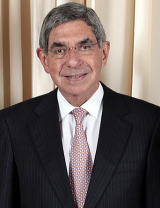 Peace Proposal.com has asked me what advice I have for young people living in Japan and around the world, and specifically my recommendations as to how they can advance the cause of peace. My advice for people under 21 can be summed up in one word: Move.

Great thinkers across a wide range of disciplines have long realized that movement is the key to the universe. The Italian theologian Thomas Aquinas held as one of his basic principles that movement is what distinguished life from the lifeless. Scientists explain that the movement of atoms and molecules heats the universe, which may at its most fundamental level be composed of vibrating strings. Economists remind us that without monetary movement economies stagnate, physicians tell us that without the movement of blood our bodies fail, soccer coaches teach their strikers that the more they move around the more scoring opportunities they will create.

But beyond the obvious examples, I would like to add this: movement is also the key to peace. There is a great misconception that peace is merely a synonym for stillness, calm, tranquility. But it is not. Peace is movement.

Individuals can move for peace on at least three different levels:

Peace cannot succeed without knowledge and understanding of others, so travel as far away as you can and encounter as many different cultures as you can. But even travel close to home can be useful. Walk around your neighborhood, around those blocks you don't see very often. Take a trip to the town next to yours. The more you see of your neighbors and where they live, the less you will fear them. And the more you will come face to face with things that need to be changed. Few things bring about knowledge, wisdom, and a change in perspective as well as physical movement.

An idle mind is a lazy traveler in the quest for peace. As fellow Nobel Laureate Elie Wiesel said, "the opposite of love is not hate, it is indifference." Complacency is the fall-back position for our minds, and in order to move forward and effect change, we must seek out new information and constantly grow. One of the best forms of mental movement for peace is studying a foreign language. This takes sustained, long-term movement, but it is so very, very worth the effort.

Intellectual movement also means challenging your own views. If you're thinking in the same exact way at the end of the week as you were at the beginning, you have not learned much. Even if your opinions do not completely reverse, issues are always more complicated than they seem, and discovering those complications is what education is all about. Educate yourselves as best you can, for peace and education go hand in hand.

Those of us blessed with comfortable lives are constantly tempted to ignore the incredible discomfort so many people on this planet endure. We are tempted to do nothing on weekends but sit idly and buy, and seven days a week to accept the status quo.

I disagree. And I hope you will, too. Once you have seen a problem first hand and you have thought deeply about it, it is time to move the political landscape to bring about the change you seek. It is no accident that groups pushing for political change are called movements, that those who desire change are agitators. The most successful of these movements and individuals are those who know that anything can be changed. Anything. If humans created it, humans can change it. You compound whatever tragedy you see if you give up hope of fixing it before you even begin to try.

When I became president of Costa Rica in 1986, much of Central America was engulfed in civil war. There was a great feeling of hopelessness in the region, as citizens and leaders alike felt that peace was impossible. But in August of 1987, the presidents of five Central American nations met in Esquipulas, Guatemala to see if there was some other solution to these conflicts besides violence.

There was heated debate at first, but in the end, we were able to reach an agreement. What won the peace was movement: we all moved toward common ground until we found it. I was able to keep the process moving by being unrelenting in my insistence that peace and democracy were not only possible but absolutely necessary. Peace and democracy are core values from which no one should ever move. It was for that combination of movement and resolve that I was awarded the 1987 Nobel Prize for Peace.

That was almost twenty years ago, and even though not all my hopes for Central America have yet been fulfilled, I still refuse to give up. I refuse to give up on the cause of demilitarization, for there is no surer step on the path to peace and prosperity, and no surer step away from peace and prosperity than military spending. I refuse to give up on dialogue as the best way to resolve conflicts. I refuse to believe there is any better system of government than democracy. I refuse to stop advocating debt relief for the developing world as both a morally and economically feasible policy. Political movement should not end with what seems at first to be a total failure or what seems at first to be a big success. Movement is a responsibility that carries through one's entire life.

A WORD ABOUT THE INTERNET

Without a doubt, the Internet offers unparalleled opportunities to move, regardless of age, race, gender or geographic location. Moving intellectually is as easy as reading online newspapers or blogs. And organizing like-minded people to work for a common goal has never been easier. In one notable example, the American Jody Williams marshals the International Campaign to Ban Landmines using email, instant messenger, online shared file structures and calendars. She won the Nobel Peace Prize for her efforts.

But at the same time, the Internet offers unparalleled opportunities to not move. How many of us have found ourselves stuck in a mind-numbing cycle of clicking-you check a favorite website, check your email, check the news, then the weather, then maybe a secondary email address, then the favorite website again-and all the while you might even think you are being productive?

Being conscious of this cycle is the first step toward breaking it. And you do have the power to break it. By all means, keep your mouse moving, but always keep in mind you should be moving it in order to inspire other people to move.

The online petition for the ATT is available at www.armstradetreaty.com. I hope you will read it over and consider signing it. And no matter what you think of the ATT, I hope you will create your own online petition and draw others to it. Petitions are so important. Nothing drives political leaders to action like seeing that their people have already taken action themselves.

So to what issue should you dedicate your own movement? There is a lot that needs changing in this world. Individuals ignore poverty. Business act for monetary gain without regard for the external costs they cause society to bear. Governments spend their people's money on implements of destruction instead of programs of construction.

In Japan, militarization has reemerged as a grave threat. The recent proposal to change Japan's constitution to officially recognize a military would be a tragic betrayal of sixty years of peace. Japan's budget for helping poor nations develop has been sharply declining, while it devotes more than quadruple that amount to the SDF. If anything, the constitution should be more restrictive against wasteful military spending, not less.

The youth of Japan absolutely must object. Write letters to the editor, set up online petitions, organize demonstrations for peace, and vote for candidates who oppose militarization. There is no time to lose. (For more information about this, see my op-ed piece in the Asahi Shimbun on December 17, 2005, published in English in the Asahi-International Herald Tribune on December 18, 2005).

As difficult as movement sounds, I have two pieces of good news for you. First, movement is contagious. It is a similar phenomenon to the crashing of particles into each other. Every nuclear chain reaction can be traced back to one free-flying neutron that crashed into the nucleus and changed the status quo. For instance, Costa Rica dared to abolish its military in 1949, and recently, using our nation as a model, Panama and Haiti have abolished their militaries as well. Make movement your primary objective, and let your intrinsic moral values guide you on your way. You will not be the only one moving for long.

And I have even better news: community service is fun! It is a well-kept secret, but it is actually enjoyable to start or join a project to help others. And not just in the sense of deep fulfillment. It can be fun on an everyday level. Try for yourself and you'll see what I mean.

So let the movement begin. I think I speak for everyone in my generation when I say I look forward to seeing where you, and the other young people around the world that move with you, end up.